Targeted at clustering tech, digital and internet companies in a catered for campus at the Kilmore Business Park in Cavan Town, the ambition of the new Cavan Digital HUb is not only to attract outside investment in, but act as a “launch pad” for new innovative start-ups in the community also.

Eamonn Sayers is manager at the Guinness Enterprise Centre (GEC) in Dublin. He’s suited-and-booted for business and appears every bit what one expects from someone widely recognised as having his finger firmly on the pulse of enterprise development in Ireland.

Since its inception, the GEC has assisted countless start-ups generate thousands of high-skilled jobs nationwide. Mr Sayers considers Cavan’s new hub, with no attempt to minimise its potential value, as “fierce important”; not just for the county, he explains, “but the region as a whole”.

“It’s about the bigger picture. The hub allows local businesses to access that and for businesses outside Cavan to see the county as, perhaps, something more.”

The Limerick native is “dead against” stockpiling work opportunities under bright city lights. The proudest moment for any GEC enterprise, he shares, is when they employ their first member of staff. He looks forward to same advancements in Cavan in due course. “It’s a case of small steps, small wins,” he remarks.

The digital and tech industry is estimated to be worth €12 billion plus to the Irish economy annually. There are currently also close to 2.9 million eCommerce users in Ireland, with an additional 460,000 expected to be shopping online by 2022.

The hub’s impact, Mr Sayers suggests, might be difficult to measure in the short term. “But in eight, maybe 10 years, that’s when you’ll see things happening. Then you’ll look back to now and say ‘this is one of the best decisions Cavan ever made’,” he confidently tells The Anglo-Celt.

Fintan McGovern from Corlough is former CEO of Firmwave, a product and solution design company that specialises in Internet of Things (IoT) and wearable devices. He co-founded the business alongside Killeshandra brothers Adrian and Ciaran Burns.

Firmwave is one of many to graduate through GEC, eventually outgrowing the centre’s nurturing environs and forging a foothold in their own right. Last year, the business successfully raised €600,000 funding with investment from private sources and state agency Enterprise Ireland.

A Commandant at the former Dún Ui Neill barracks, via an MBNA programme at Smurfit Business School before going to work with Kenmare Resources in Mosambique and Denis O’Brien’s Digicel in the Caribbean, Mr McGovern has agreed to lend his experience as a director of the new Cavan hub.

“I was very proud [to be asked to get involved]. The Border area has been a little bit forgotten, and it has a hell of a lot to give,” attests Mr McGovern, who grew up near Brackley Lake.

Cavan, he adds, has “measurables” businesses do look for. As a result, he reasons, the county is perfectly positioned to benefit from any inevitable economic sprawl from cities like Dublin. The hub, he states, will only “enhance” that attraction.

“What the hub represents is a force multiplier. Now that it’s here, people will come to it,” predicts Mr McGovern, who will soon launch an, as yet unspecified, new venture of his own.

Donal De Paor, CEO of Glic Tech, formerly Veltig, is one of three anchor tenants announced for the Cavan hub.

Glic Tech migrates businesses to the cloud through implementing Sage Financials, an accounting solution built on the Salesforce platform. They will occupy the upper-most floor of the tower complex.

Other tenants include Apridata, a data analytics firm run by Richard Stafford; and IT cyber security support company, Cinnte, set-up by Danny Barr.

In total, there are 14 temporary hot-desking positions, 30 dedicated desks, and 15 private office spacings that range in capacity from two to 12 persons.

Other facilities include a reception, meeting and training room, a ‘breakdown’ area to facilitate in-house networking, and a canteen. 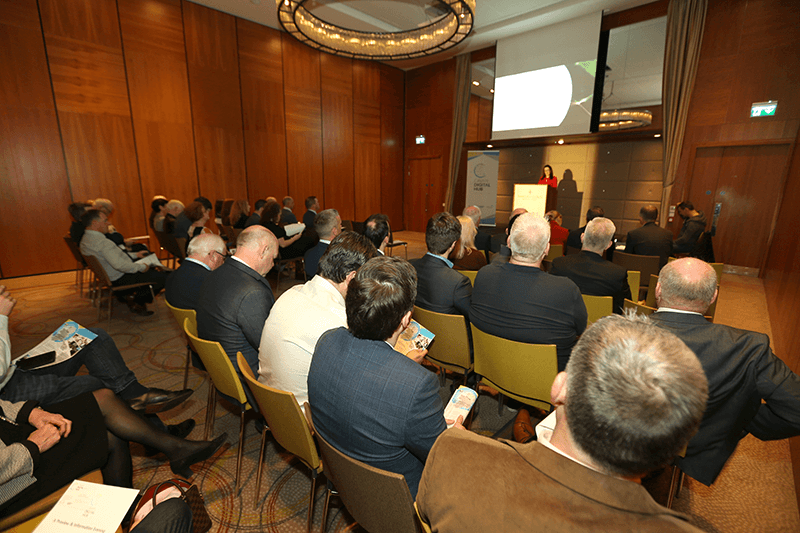 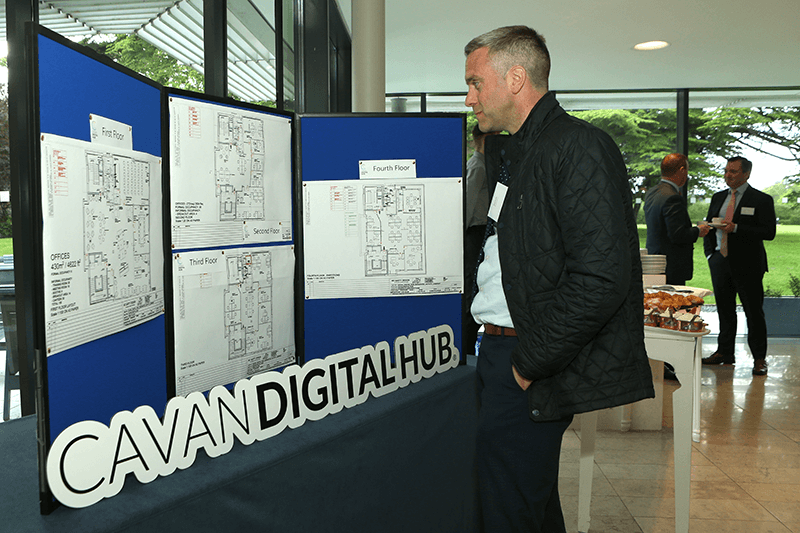 Getting the hub up and running, Mr De Paor reiterates, was critical to Glic Tech remaining in Cavan.

“If the hub wasn’t here, we possibly wouldn’t be able to scale as we had hoped,” says Mr De Paor, whose company is itself in the final stages of securing Enterprise Ireland funding, as well as reaching out to so-called angel investors with a view to taking the business “to the next level”.

Already some of Sage Financials biggest customers, which include globally-recognised publicly-traded companies, are being supported out of Cavan by Glic Tech.

To the likes of Enterprise Ireland and other such agencies, the hub represents something “tangible, something to sell” to prospective investors. “It’s a whole new landscape to bring to Cavan,” considers Deirdre Craven, senior regional development executive, North East.

Enterprise Ireland, through the Department of Rural and Community Development, provided €217,000 towards the hub’s set-up. A further €100,000 was obtained through the Rural Economic Development Zones (REDZ) scheme; while the council itself has committed more than €300,000 to date.

Marcella Rudden, head of the Local Enterprise Office (LEO) is understandably excited by the hub’s opening. “Not only is it there to provide an attractive option for outside investment, but it will also provide local entrepreneurs with an opportunity to work in what is going to be a world-class facility with potentially worldwide connections.”

From an education standpoint, CEO of Cavan Monaghan Education and Training Board (CMETB), John Kearney, regards the spin-off for learners and graduates as a “wonderful prospect”.

They only recently launched a new ICT apprenticeship, and says: “We see that as a natural feeder for a skilled workforce to operators at the hub. As natural skills and training needs emerge, we’ll look to meet those as well.”

Brendan O’Reilly sits on a nearby sofa. Deep in conversation, the milky surface of his neglected coffee thickens as it cools in front of him.

He works with the Department of Education, and is currently guiding the digital curriculum being rolled out in schools across the country. “There is a common misconception that so-called digital natives, younger generations, know all this stuff already. But what we’re trying to instil is an understanding of how these things work. It means that when young people leave school, they’re immediately prepared to plug into what opportunities are out there,” he informs the Celt.

The New Zealand native has seen it all before. Back in his home country, a rural-based economy similar to Ireland, the government set about investing in broadband infrastructure before concentrating on education catching up. While Ireland has seemingly taken a direct opposite approach, he’s confident the investment in future generations will pay dividends regardless. 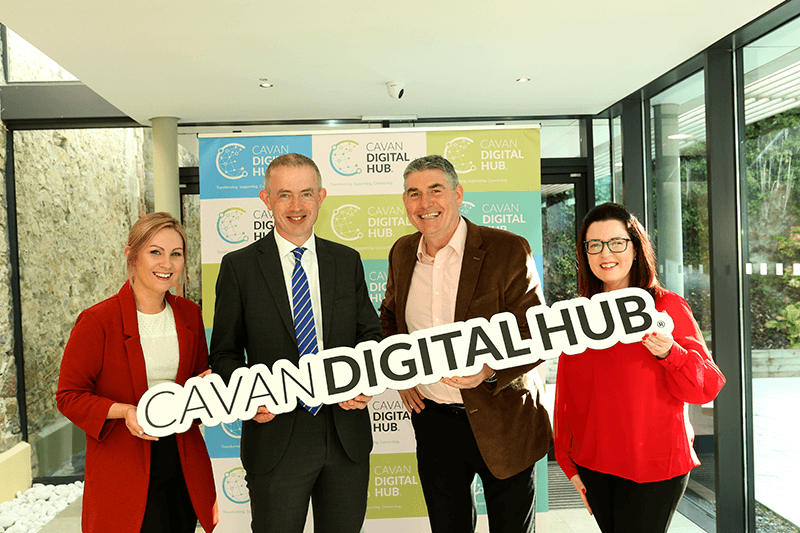 Shane O’Reilly from Lacken, a former St Patrick’s College student, is sitting nearby. They’re no relation, only this particular Mr O’Reilly works as a digital designer for a major budget airline company. He commutes to his workbase in Dublin, and understates the daily three-hour round-trip to Dublin as being “tough”.

The hub for him represents a unique opportunity to strike a better ‘work-life’ balance.

“There are hundreds who make the same journey every day. I’ve no doubt they’d love not to have to be stuck in traffic. Hopefully [the hub] is something that’ll benefit me in that way.”

For Director of Services, and chair of the hub’s new Board of Directors, Brendan Jennings, he’s comforted by the knowledge the hub’s true value is not merely contained within its four stacked floors.

Fit-out and construction was carried out by Jimmy Jackson’s Sandar Construction, with assistance from Wynne Gormley, Gilsenan Architects, and a team of consulting engineers and interior designers that included Bernard Smith, Leo Scariff and Grainne McGarty.

On the technical side of things, Dublin-based Paradyn tailored the hub’s network IT; while all has been elevated through SIRO’s unrivalled one gigabit per second broadband connectivity. 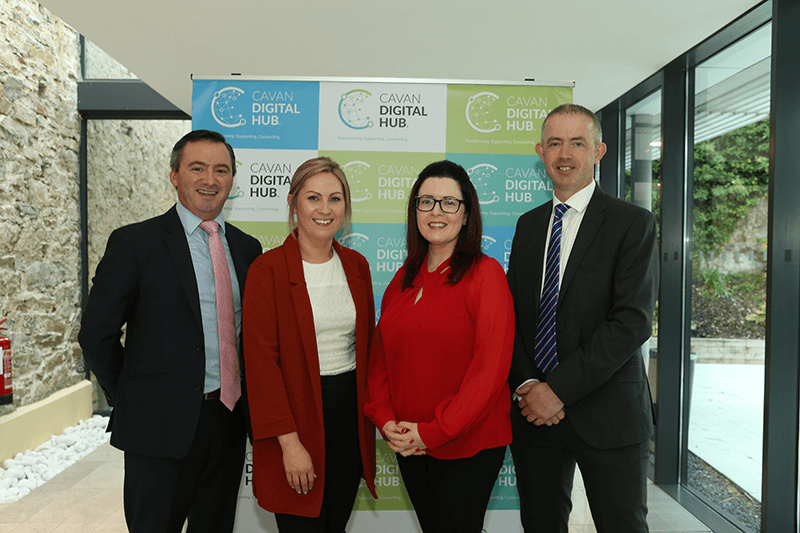 “This is the start of something big we hope,” confides Mr Jennings, who in his remit covering local economic development, envisages the hub framed by initiatives such as the enterprise park in Cootehill, and similar pipeline investments for Cavan Town and in Virginia. “We’re looking at this as a launch pad for what we hope are great things for Cavan on the enterprise front.”

Newly appointed hub manager, Leanne Connell from Munterconnaught, agrees. She’s supportive too of the “small steps” philosophy espoused by Mr Sayers. Those tentative traipses could quicken in pace after the GEC boss revealed a partnership between his Liberties-located facility and the new Cavan hub.

Allowing local clients to utilise GEC services in the capital, representations have also been made to have Cavan selected as next to benefit from GEC’s ‘Prosper Programme’, an initiative aimed at creating a digital network of supports among a county’s business diaspora.

The intent is so, when businesses build scale in Cavan, they have the added opportunity to take advantage of GEC’s global position and its burgeoning community of over 500 entrepreneurs, start-up advisors, and eager seed capital investors.

Ms Connell anticipates the new Cavan hub, when opened, can further provide a catalyst in building a ‘digital cluster’ ecosystem by linking with the hugely successful Hive in Carrick-on-Shannon, and a similar type development currently being planned for Co Longford.

There are 26 businesses currently resident in the Leitrim hub, which only opened in late 2013.

“You’re going to see a lot of collaboration going forward,” says Ms Connell. “This hub is not just isolated in Co Cavan. We’ll be looking for businesses to connect with us. We will be working with the likes of CMETB, with local businesses, we want people to be aware this is here, and to realise the potential of what this can me for our county.”